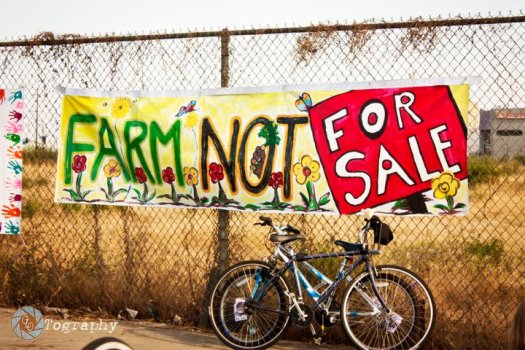 “We didn’t take off until 3pm but we were approximately 20 strong. It was really dope cuz no rider was left behind. One rider  got a flat and a Bici Digna dude stayed behind to help her.

As we waited, we received lots of support from the drivers who drove by us. Once the missing riders were in sight, everybody cheered! YAY!!!! It was a happy moment!

Mayra’s pick for this street was excellent! She wanted to demonstrate more of the community instead of simply ugly factories. Riding down Central felt really awesome because there were lots of people out and the Ovas got lots of exposure. There were even little kids around who were excited to see several cyclists. We’re role models!

So we rode on through to 41st to South Central Farms. There was cheering as we arrived (not sure if it was us or the people already there). Nevertheless, we definitely felt welcomed and the love! We parked our bikes along the fence and enjoyed in the festivities. The Ovas enjoyed mangonadas and the delicious food that ‘Food Not Bombs’ made for everybody.

As for the weather, it was on our side. The sun was out but was not too hard on us. Overall, it was a great day for all!”