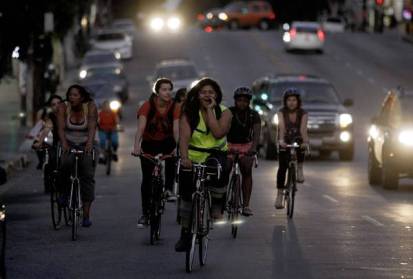 Growing up, Evelyn Martinez’s mother didn’t want her to ride a bike.

“She thinks it’s not safe for women to be riding late at night, and cars are dangerous too,” Martinez said.

Moreover, her mother told her: “Bicycles are for men.”

But after a chance meeting last year, Martinez joined an all-female, predominantly Latino cycling group that is both an answer and a challenge to the aggressive male biking culture. Like men’s bike crews, it defies L.A.’s monolithic car culture with an in-your-face ethic, reflected in its name: the Ovarian Psyco Cycles Brigade.

The group says the name “is a play on words intended to be playful and simultaneously create some sort of acknowledgment/acceptance/pride in one’s historically oppressed body.”

to read the rest of the story, click here: HERE!