Muxeres! It’s that time of the month again. This month we will be dedicating the LUNA ride to sexual health and sexual healing. The discussion will be held at the breathtaking Rio de Los Angeles and facilitated by an incredible hermana. AND we will also be raffling off “safe sex kits.” Hope you all can make it. It will be chilly so bring a sweater.

As a reminder, LUNA Rides are strictly Womyn-identified only, please*
that means, ladies, leave your men at home
REMEMBER TO BRING:
–WORKING BICYCLES!!
–a helmet and other protective gear you may need!
–a warm sweater
–lots of positive energy, openness and love

Cindi Santana was only 17 years young when her life was TAKEN from her due to an ex-boyfriend who took his anger and frustrations too far and took the life of his ex-girlfriend.

Ovarian Psycos will be dedicating this month’s Luna Ride to domestic violence awareness and in remembrance of Miss Santana.♥

We will ride from Hollenbeck Park in Boyle Heights to the Coyolxauhqui ceremony in City Terrace
Meet up at 7:15 pm
Ride out at 8:00 pm
Ceremony will start around 9 pm

We will be making an altar for Cindi together after the ceremony
If you would like to, please bring candles, flowers, pictures

The ride will be about 3.5 miles

-Bring your bike lights
-Working bikes!! We can not stress this enough.
-We don’t leave anyone behind but please understand that we try to be prompt.

It’s HERE!! Another wonderful ride put on by the CicLAvia folks!

“CicLAvia temporarily removes cars from LA streets – and the streets fill up with smiles! CicLAvia is not just for recreation. It is social integration.”

Come ride in solidarity with us as we continue to support & strive for:

Distance: About 10 miles (one way)

EVERYONE IS WELCOME!!!! ALL TYPES OF BIKES, SCOOTERS, SKATEBOARDS, ETC! 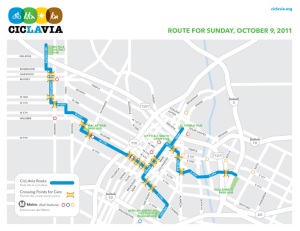 Finely chop your tomatoes, onion and avocado. Mix into a bowl with your black beans and corn. Sprinkle salt and lemon to taste and ay esta! Serve on your favorite tostadas.

This recipe is a hit with the Ovas. Not only is it delectable, but the health benefits are amazing! For example, avocados help with nutrient absorption and have anti-inflammatory benefits (i.e. it’s good for that arthritis!). Black beans are high in fiber, folate, protein, and antioxidants and help support a healthy digestive tract. Avocados and black beans are both great for blood sugar regulation (’cause nobody wants diabetes!), improve cardiovascular health (gotta keep that corazon healthy) and have even been linked to reducing the likelihood of certain cancers! Nutritionists also note that a diet low in sodium (salt) can reduce the risk of high blood pressure which afflicts nearly one in three Americans and is a leading cause of cardiovascular disease!

Ahoy Ladies & Gents! Summer is coming to and end but that doesn’t mean the fun has to stop! End your summer right with a long and healthy 13 mile ride to “da Westside” Venice beach with the Ovarian Psycos! Then stay and kick it at Venice Beach to your hearts content.

Bring your frisbees, bathing suits, your rockin’ tunes & just come and have an all-around beachin time!

*Reminder: PLEEEEEASE be sure to to bring your WORKING bici’s, helmets, lights, sunblock AND PLENTY OF WATER!! We will be making pitstops!!

Get ready muxeres! It’s that time of the month again!

This ride we will be “baptizing” the new 1st street bike lane in Boyle Heights! This is also a special time of the month for OVARIAN PYSCOS because September is OVARIAN CANCER AWARENESS MONTH! We want to recognize all the womyn who have gone through, fought & even passed away due to ovarian cancer (and all other types of cancer as well).

Please be sure to wear your Ovarian Cancer Theme Color: TEAL! And you will be eligible to receive an Ovarian Cancer Wrist Band: which says – “Fight Like a Girl!!”

We will be meeting up at the Gold Line Indiana Station in East Los & ride to the “Cornfield” which is located North of Chinatown and South of Lincoln Heights. 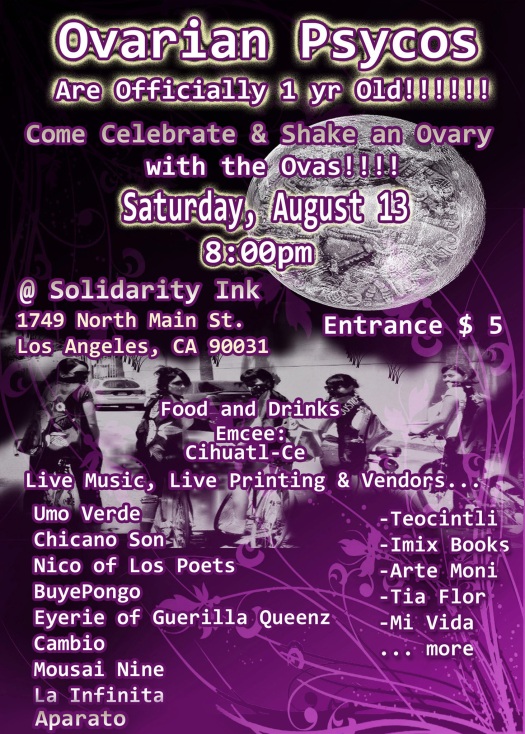 The Ovarian Psycos officially turn 1-year old this Summer!! Celebrate this momentous occasion by joining us in the celebration on Saturday, Aug 13 2011 @ Solidarity Ink!

Emcee of the Night:

**All this plus vendors, raffles, food, drinks, live printing, and more!!!

We appreciate all the support and well wishes from you all year long!! ❤

When I arrived, I felt a rush of excitement running through my body, blood was pumpin, & ovaries we’re MOVIN! I saw a sea of muxeres con sus bici’s. Many were talking, laughing and greeting other womyn with warm hugs and hello’s and the occasional, “DEEENG, WASSUP GIRL!” was heard. Whether you rode by yourself or with a friend, everyone was welcomed with open arms! There were last minute repairs to some bikes, and I have to say, Momma-Ova Monica Perez and Ova Jocelyn Hernandez handled. More than 30 women showed up! It wasn’t until we began to ride down Marengo towards City Terrace when I finally looked up and saw her! Shining BIG & BEAUTIFUL & lighting our way. Coyolxauhqui had come out of hiding and let her light shine to let us know she was present and guiding our journey.

When we arrived at La Mina the womyn were greeted with  music and drumming. International Liberation Photographer, Pocho1,  had this to say about the experience… ” As I silk screen, I hear loud shouts, screams, and howls at the moon. Muxeres who seem to be invading a village or pillaging a men’s establishment when they take over the place. It is nothing but love , respect & education in the air. It was quite an honor to capture la lunada y las Ovarian Psyco-Cycles. Solidarity work is here.”

After we left La Mina, we headed toward the Coyolxauhqui statue on City Terrace and Miller and were greeted by Las Mujeres De Maiz. The Womyn lined up one after another, got smudged and formed a circle around the statue. Fe  Evaone shared a few words and a song giving thanks and respect to the 4 directions as well as Mother Earth and Coyolxauhqui. We were givin tobacco as an offering and placed it on whatever body part we chose to pray for. By the time it reached the last womyn there had been much laughter and to the surprise of many womyn, tears. I heard one womyn say, ” I came here thinking I was going to ride my bike….little did I know I was going to be sobbing.”

If there is one way to describe this night, it wouls be UNBELIEVABLE, UNEXPLAINABLE, & MAGICAL. Definitely a Luna Night to remember ❤

A slow cruiser ride through downtown and up to Elysian flats under the guidence of the full moon. 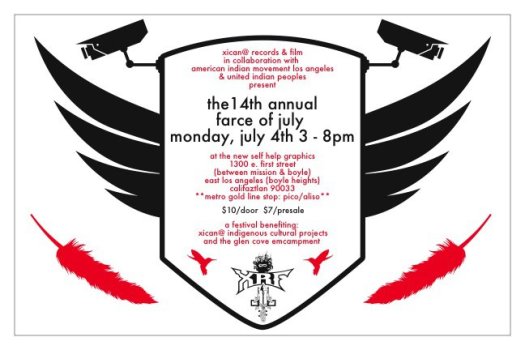 The Ovarian Psyco Krew will be tabling this Monday 7/4/11 @ Self Help Graphics for the 14th annual Farce of July event.

Our own Psyco Sisters will be there workin hard. Cihuatl Ce on the mike, Eyerie as MC, and live screen printing by Andi. Come on down and have a great night! Don’t forget to stop by and say hello!! There’s nothing we’d love more than to meet you guys!